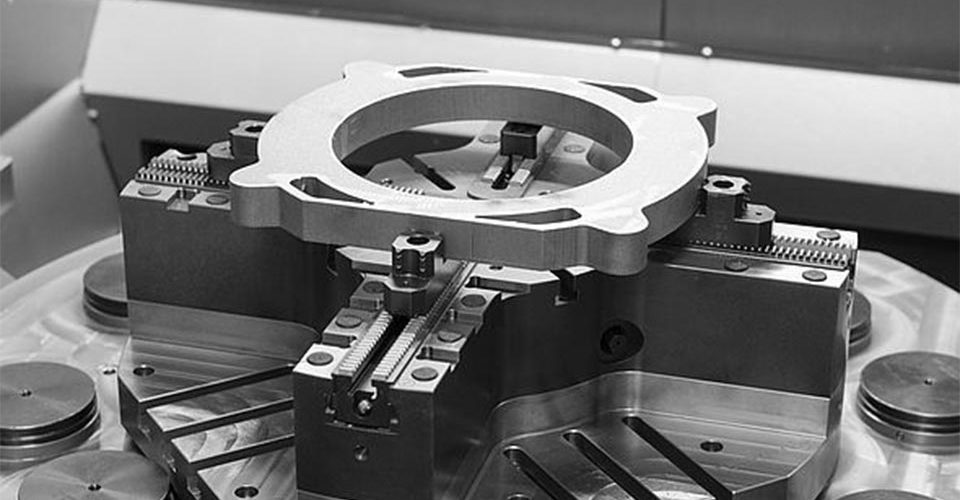 What do a cocoa press, a printing machine and a wind power plant have in common? Highly different parts can be fitted in them which at Kersten Maschinenbau are all machined with INOFlex® clamps from HWR Spanntechnik.

The diversity of parts manufactured at Kersten Maschinenbau GmbH in Niederau near Meißen is enormous – and also one of the strong points of the company. Here one relies on qualify and reliable staff, on an ultra-modern stock of machines – and on INOFlex®, the centrically and compensating clamping four-jaw chuck from HWR Spanntechnik.

Established as a craft company in 1965, the company re-orientated itself as a machine construction supplier after German reunification. In 1990, the firm, with 15 employees at the time, invested in the first CNC-machining centre. Today, Kersten employs 130 staff and has access to over 30 ultra-modern processing machines.

It is quite clear that flexibility and efficiency at Kersten are major concerns. According to Kersten, the technical equipment has an important role to play. For instance, the machine construction supplier looked for an up-to-date clamping arrangement in 2016 so as to manufacture the different components more flexibly and with the required precision. An important criterion in making the decision: the clamp was to be easily accessible for tools and also clamp flexibly and safely.

At the AMB 2016 in Stuttgart, Dipl.-Ing. Mathias Scheel, responsible at Kersten Maschinenbau for production planning and tool preparation, became aware of the INOFlex® VL chuck from HWR Spanntechnik GmbH.

THE ALLROUNDER UNDER THE CHUCKS.

INOFlex® is a universal, centrically and compensating clamping four-jaw chuck with which, for instance, on combined turning and milling centres round, rectangular and geometrically irregular parts from 160 to 1,200 mm in diameter can be clamped. “What I immediately liked was all clamping jaws of the four-jaw chuck resting in a compensating manner against the workpiece from the operation of only one spindle and that this workpiece centres to the middle”, recalls Mathias Scheel. “And we were, of course, extremely interested in the possibility of clamping round, cubic and geometrically misshaped workpieces with a single clamp.”

And just under a year later, Kersten Maschinenbau was already operating three of these “all-rounder chucks” from HWR: a 400 manual chuck, a 700 VL chuck and a 420 VL. “We are very satisfied with the INOFlex® chucks”, say Udo Kersten and Mathias Scheel. “The quality of the products is fine and the patent of the compensating four-jaw chuck functions flawlessly.”

Setting-up time is saved on each part that at Kersten had to be clamped using intricate clamping iron or magnet clamping plate fittings and which today are clamped in the INOFlex®. That is why one tries to deploy the chucks everywhere where traditional clamping devices nearing their limits and where INOFlex® chucks easily master the machining assignment.

“The INOFlex® chucks are really predestined for thin-walled rings. This is where we improved CONCENTRICITY”, Mr. Scheel establishes this and at the same time points to another advantage. Cubic workpieces can be clamped quickly and easily in the chuck. For their new Alzmetall GS1400 turning/milling centres acquisition – apart from a shortening of the setting-up time and greater flexibility – this brings added safety in turning work. Mr. Scheel explains: “For safety reasons, it was not possible to use the turning function given several clamping operations. This is now quite easy thanks to the INOFlex® clamp. Basically, two aspects are attributable to a reduction in the setting-up time. On the one hand a complete clamping operation can be saved on the lathes or milling machines. After all, INOFlex® supports full machining from all sides. On the other, what is striking is the low outlay needed on cleaning the chuck compared to other clamping devices. “You only need to clean the supporting points and then directly insert the next workpiece”, according to Mr. Scheel.

MORE FLEXIBLE WITH OWN SPECIAL BRACKETS.

Apart from on the two lathes/milling centres Alzmetall GS1400, the INOFlex® from Kersten Maschinenbau can also be flexibly fitted on other machines. For instance, the INOFlex® VD400 manual chuck from Kersten has been adapted for use on practically every machine in the turning shop.

The company’s own production of special purpose brackets allows the compensating four-jaw centering clamps VL070 and VL042 to be clamped via the zero-point clamping system installed on almost all machining centres and also directly via the machine table. “As a result, the VL070 can be fitted on our two Alzmetall GS1400, the Reiden RX18, the Hermle C50U, the Hermle C42U, the Ibarmia ZVH58 and all three-axle machining centres”, reports Mr. Scheel. “And in addition to the above, the most recently bought VL042 can be fitted on our two Hermle C800U where it replaces the somewhat older three-jaw chuck that has had its day.”

PRECISION AND RAPIDITY IN COOPERATION.

“The fact that we constructed the base plates ourselves was important”, emphasised Udo Kersten. “The best thing is that HWR Spanntechnik has been absolutely flexible at all times.” Kersten also very much appreciates the precision and speed with which joint projects are handled. “And also the quality of the 3D-data provided”, adds Mathias Scheel, “is something we find very good. We need precision 3D models to draw up the clamping plans and CNC programmes in the production planning phase. This provides us with the basis to precisely and realistically simulate each machining situation in the interaction with machine and tool models in advance.”

The integrated vice functions with one or two fixed stop jaws allows the customer – apart from the compensating four-jaw chuck – to use the application as vice, fixed stop clamp or as two-jaw clamp. Matthias Meier, Head of Sales at HWR Spanntechnik GmbH, is certain that this flexibility is unique on the market at the moment.