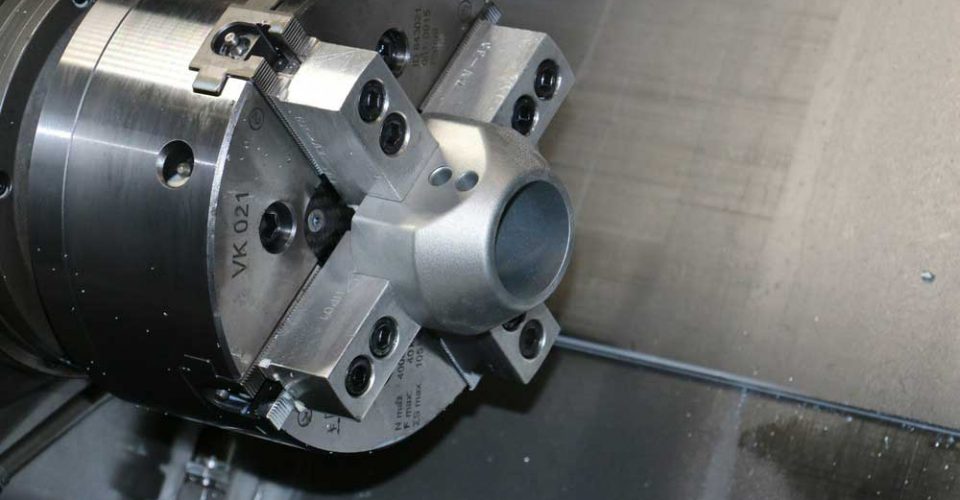 Thanks to the INOFlex and INOZet clamping solutions of HWR Spanntechnik, EMB Zerspanungstechnik can meet the quality demands of customers even better in series production.

The Lahntahl in central Hessen near Biedenkopf was where many small and large foundries were located until 1960s and 1970s, but only the large ones were able to withstand competitive pressure long term. This also reflects the history of EMB Zerspanungstechnik in Biedenkopf. The company was founded in 1955 as an iron foundry for hearth and furnace casting.

Michael Runkel leads the company in the third generation as managing partner and employs 17 people. Runkel’s father and uncle had switched the company from foundry to purely mechanical processing in 1973. The company has been using CNC machines for this purpose since 1986. Today the machine park comprises twelve CNC machines for turning and milling.

The most common materials which EMB machines are spheroidal and grey-cast iron. These are usually finished castings but also continuous castings in the case of one customer. In addition, the Biedenkopf company also manufactures components from aluminium and to a larger extent from stainless steel predominantly of the 1.4305 material.

“Most of our customers are foundries and engine plants along with others from agricultural technology, bearing technology and the fitness industry”, is Michael Runkel’s summary of the broad customer base.

The turned parts which EMB machines are 20 to 300 millimetres in diameter with individual weights up to 14 kilogrammes. “We are a series manufacturer through and through. The lots are ones from 200 to 30,000 units”, explains Mr. Runkel. Around 80% of the components machined by EMB are turned parts. Michael Runkel refers to a marked increase in the milled parts proportion over the past few years. The turning/milling centres of EMB’s production enable all-in machining with main and opposed spindle – and also in the five-axis range.

EMB’s range of work & services also includes sub-assembly mounting in addition to turning and milling. “In our assembly department, we assemble, for instance, some 50,000 sub-assemblies each year for a major customer which – as completely picked & packed merchandise – are supplied with all accessories directly to the customers”, clarifies Mr. Runkel.

EMB cooperation with HWR Spanntechnik began in 2015 when EMB purchased the INOFlex® compensating, four-jaw chuck from HWR. “We had received an enquiry from a customer on machining aluminium components. One of these components recalled my mind to an advertisement from HWR Spanntechnik for the INOFlex® chuck. After a thorough examination, we decided to opt for this chuck as it promised ease in clamping the component”, remembers Mr. Runkel. INOFlex® is one of HWR’s own chucks with which round, rectangular and geometrically misshaped parts can be centrically and compensatingly clamped.

EMB uses the INOFlex® chuck on an Index G200 turning/milling centre. Currently, two almost identical-in-design parts are being machined with the chuck for a customer on the machine. „We also now use the chuck for other components. The parts are components for supporting arm systems. The INOFlex® is the ideal clamping solution since the parts have two straight and two semi-circular surfaces. The part could not be properly clamped in a three-jaw chuck“, explains Mr. Runkel. Optimum clamping of the parts is needed as the zinc die-cast parts hardly display any machining tolerance. “It follows that an advantage of the INOFlex® chuck is its capacity to centre the component correctly at all times”, praises Mr. Runkel.

Since October 2016, Dennis Richter from HWR’s Technical Sales has been attending to customers in North-Rhine Westphalia and the surrounding regions. Although he was not present at the launching of INOFlex® at EMB, he did monitor the next joint project in mid-2018.

“Our job was to manufacture a high-precision component with a six micrometre cylindricity for a customer. That is a highly demanding task in contract-based production”, according to Mr. Runkel. It was clear to him that only with pendulum chucks would it be possible to clamp the workpiece. “I am well acquainted with the HWR product range and so I immediately contacted Mr. Richter. On having seen the drawing, we both very quickly agreed that the INOZet® clamping system was the right solution.”

With the INOZet® clamping system, an extremely flexible and compensating six-jaw chuck for clamping thin-walled components can be made from an existing, traditional three- jaw chuck with attachable pendulum bridges. With a set each of gripper jaws for internal and external clamping, INOZet® machines whatever diameter the blanks have. This is a decisive benefit over a three-jaw chuck equipped with traditional clamping jaws.

“We looked into whether the component with this precision requirement lies within the range which the INOZet® system can clamp.
It is difficult to guarantee this with a cylindricity of six millimetres. I said to Mr. Runkel that although a risk was involved, we still intended to support the test”, was how Dennis Richter described the situation at the outset It was the right solution and became a success. “Set-up, specimen manufactured, finished. It was quite simple – as was intended”, put by Mr. Runkel in a nutshell.

The idea is for a further component to be clamped at EMB with the INOZet® system as clamping with a normal thee-jaw chuck has resulted in out-of-centre pressing. “The INOZet® is a great product and functions perfectly”, praises Mr. Runkel.

The forerunner of HWR Spanntechnik is the Henke design office founded in 1989. As early as 1990 clamping jaws were being marketed. HWR developed its own product range from 1995 onwards. In the years that followed, HWR brought INOZet®, INOTop® and INOFlex® onto the market.