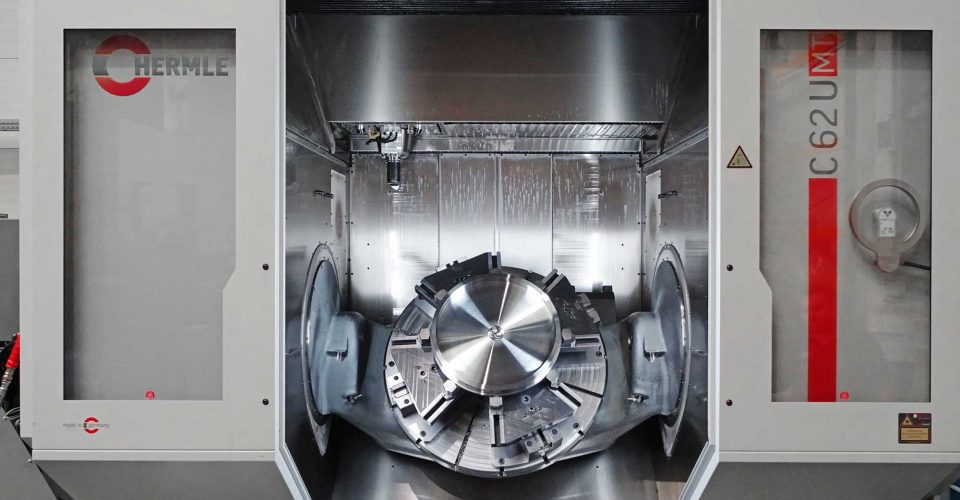 Flexible in the possibilities, precise under pressure: This is how the philosophy of PräziTec Haustein GmbH can be summed up. The metal processing company from Tettnang on Lake Constance produces a wide range of turned, milled, grinding and multi-task processing parts for customers from a wide variety of industries.

Since June 2018, the 4-jaw-chuck of the concentrically and compensating clamping INOFlex® of HWR Spanntechnik GmbH from Oyten has been deployed which, in particular, meets the exacting requirements of both precision and flexible manufacturing.

As space soon became scarce due to the continuing expansion of the machine stock, the Hausteins moved to nearby Tettnang two years after the firm was founded. Ten years later, in 2007, a new manufacturing bay provided for further growth.

In the meantime, the regular customers of the family-run company have become more diversified. The high-precision manufactured parts are used, for instance, in vehicle and utility vehicle construction, mechanical engineering, medical technology and in aviation. Workpieces of cast iron, steel, stainless steel and aluminium are metal-cut. Production parts up to 220 mm in diameter can be produced in batches up to 150,000 pcs. Large parts are available in batch sizes between 1 and 150.

According to Managing Director Andreas Haustein, a unique feature of the company is its first-class technical equipment, enabling a broad manufacturing range between 65 and 1.200 mm diameters: “We have machines which hardly any supplier has and so we can resolve particular tasks in metal-cutting – something our customers very much appreciate”, says Mr. Haustein. PräziTec has always followed the philosophy of making machines, tools and clamps so compatible to ensure highly flexible operations.

“We can very efficiently turn, mill and drill highly complex parts on our multi-task machines in one clamping operation”, he explains. “Unproductive setting-up times rarely exist.”

A chuck for almost everything: INOFlex® VL120

INOFlex® VL120. The INOFlex® VL120 chuck from HWR-Spanntechnik plays a major role here. Measuring 1,150 mm in diameter, the patented all-purpose clamp allows round, rectangular and geometrically misshaped workpieces from 160 to 1,200 mm diameters to be machined. This special feature – which no other clamp on the market offers – is something that PräziTec has learned to appreciate particularly when turning a round component on a square blank.

“The clamp has been almost continuously in service since it was bought last year. With it we cover 85 to 90 % of the large parts”, stresses Andreas Haustein and adds: “INOFlex® has practically replaced a vice for us. We can directly clamp components with the chuck which otherwise would have been machined by way of a fixture.”

The 4-jaw centering clamp was acquired together with a new multi-task machining centre, namely Hermle C62 MT, which is now the largest machine at PräziTec. Mr. Haustein had seen how the CNC machine operated at the machine construction firm. The INOFlex® VL120 chuck was fixed on it – a combination that impressed him.

PräziTec – the name is programme

The demands that PräziTec places on precision of the manufactured components are exacting. This is shown by the company’s name but also by glancing into the company’s manufacturing bay. The modern multi-task-machines have a measuring function which determines the quality of the workpiece during machining. But this in itself is not good enough for the Hausteins. “The findings can be quickly distorted by surrounding conditions”, explains Andreas Haustein. “That is why we have a measurement chamber with a ZEISS CNC-3D-coordinate measurer complete with scanning which allows us to examine even large components up to 1,200 mm and in a much more precise manner.” This is how he describes the benefits of the instruments which contribute decisively to quality assurance. “As such, we can handle tolerances up to H5.”

“We want our stock of machines to be state-of-the-art at all times”, says Mr. Haustein. Only in this way can a “constantly high product quality” be ensured given the enormous diversity of sizes, shapes and process materials.

Especially when it is a matter of machining deformation-susceptible and misshaped components, the Hausteins with their INOZet® have a true ace up their sleeves. The likewise patented pendulum bridges from HWR Spanntechnik have been acquired together with the INOFlex® chuck and the CNC machining centre – an investment which Andreas Haustein is not likely to regret. In particular when machining thin-walled, round workpieces, he appreciates the advantages of the pendulum bridges. “We use them mainly for flange-like components”, he comments. Doubling the clamping points from four to eight makes the decisive difference. The improved distribution of clamping force and shortening of the exposed gaps results in a marked reduction of component deformation. The outcome are first-class machined workpieces of immaculate concentricity.

The INOZet® pendulum bridges are also a paying proposition economically. The damageable pendulum mechanism is protected against dirt and can be cleaned quickly and easily, as Andreas Haustein emphasises: “All you need is to clean the supporting points”, he explains. The pendulum bolts are then optimally protected from dirt-induced wear. There is no need to acquire innumerable customized clamping jaws over the long-term since – together with a set of standard clamping jaws – the INOZet®-pendulum bridges cover the entire clamping range and can be retrofitted at low cost at any time.

Machine operator Thomas Walther is also aware of how well his workplace is equipped: “The machine with the large chuck and the pendulum bridges – this puts us in a completely different league”, he concludes.