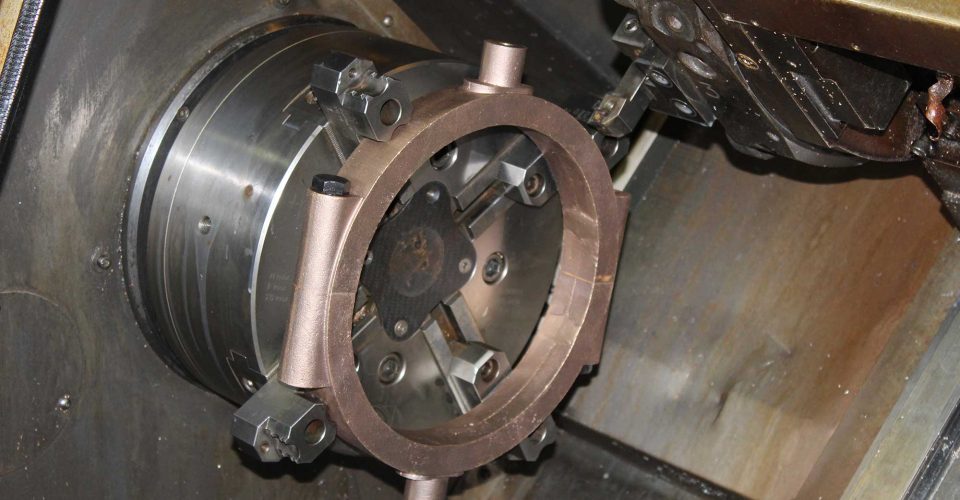 When Andreas Meier Zerspanungstechnik was founded in 1996, the future orientation of the company was very quickly clear: the machining of castings and flame-cut parts as a commission manufacturer. 12 employees, two of whom are trainees, produce the workpieces through turning and milling and with which the company has made its name.

As Andreas Meier comments today, it was immediately clear to him during his time as foreman in Zerspanungstechnik that he would take over mechanical machining from his employer at the time. In view of the cast basic material, the young entrepreneur was immediately faced with something special from his first orders. On the one hand, many different clamping devices were needed such as two, three and four-jaw chucks since the machines were used flexibly. This resulted in considerable costs in acquisition and with regard to set-up and clamping times. On the other, their own fixtures had to be made for everything not clamped in a chuck. As at the beginning, the series quantities were on the low side, a productive manufacturing was only possible with great difficulty.

MAJOR CHALLENGES FOR THE YOUNG COMPANY.

It was also difficult to ensure the workpiece qualities since the three-jaw chuck often deformed the component in a polygon way leading to complete utilisation of the tolerance. In using four-jaw chucks the blank tolerances resulted partly in an over-compensation of the chucks.
In the worst case, this meant that only two from four chucks gripped the component. The unstable clamping operation led to poor surfaces and uneconomic cutting conditions. On the other hand, the use of compensating plates between component and jaw resulted in lengthy workpiece changeover times and was thus unproductive. “Components were even ripped out of the chuck during machining”, explains Andreas Meier, “which caused substantial damage to some machines.”

GRIPPING THE WORKPIECES COULD NOT BE SATISFACTORILLY SOLVED.

Even with recurrent components, work was performed with completely different technology values depending on the semi-manufactured product quality. And this was done flexibly with castings of aluminium, stainless steel, gun metal, brass, cast steel and cast iron along with various steel flame-cut parts. The employees working in two shifts did an inordinate amount of work on the six CNC lathe and two CNC 4 and 5 axis machining centres.

In 2013, however, Andreas Meier discovered the INOFlex® chuck when visiting the EMO in Hanover. This chuck solved all the machining challenges – those of a large blank tolerance, flexible contours, gripping on deformed inclines and flamed-cut edges as well as ease in clamping deformation susceptible components. However, for Andreas Meier the INOFlex® with manual gripping could not be operated at the CNC lathe.

INOFlex® IS THE PERFECT SOLUTION FOR COMPLEX CLAMPING OPERATIONS.

As soon as the INOFlex®VK (power gripping system) was available, a specimen of a 315 mm size was acquired and after some misgivings from the staff was then universally employed. Improvements were seen even when machining the first component. Since with the INOFlex® chuck all jaws always grip with the same force even under a size deviation of the component, the machining time was reduced from 18 to 9 minutes. The reduced inclination to oscillations ensured an improved surface grade despite higher thrusts. And since the component affected was deformation-susceptible, the CONCENTRICITY improved by the factor 9 showed the extent to which INOFlex® simplified the multi-machine operation.

THE OTHER CLAMPING DEVICES HAVE ALMOST HAD THEIR DAY

A two-jaw chuck is no longer in service since with INOFlex® a two-jaw gripping without a chuck change is implementable. If possible, the three-jaw chuck is also dispensed with as some 90 per cent of the parts can be clamped with a shorter set-up time thanks to INOFlex®. As a result of the compensating gripping chuck technology, fewer clamping jaws are needed – something which also lowers the costs in acquiring them. On becoming aware of the new clamp benefits, the staff of the small parts machining section also requested a size 210 mm INOFlex® chuck. This was soon obtained and on the same successes can now be realized.

As components are to be machined clamped in a chuck with a through hole, Andreas Meier has also tested the latest HWR development: the INOFlex® VT, power clamping with through holes. This chuck considerably lowered the daily programming outlay and with no difference in the quality and safety of component clamping. “If the INOFlex® chuck had been available ten years ago, I would no longer have any two, three or four-jaw chucks in the company and each lathe would be fitted out with INOFlex®”, states Andreas Meier. As consideration is being given to acquiring new machines in 2017, one thing is already clear to the entrepreneur: “All options can be discussed, but the chuck will be an HWR INOFlex®.”